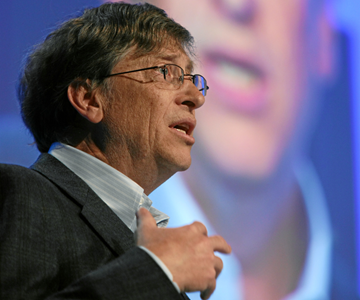 “Don’t compare yourself with anyone in this world … if you do so, you are insulting yourself.” — Bill Gates

When Bill Gates came to talk to a group of us, I didn’t know what to expect.

“How do you spend your time now?”

He paused for a moment, then he responded, “I have enough money to buy the books I want, and I read a lot.”

I wondered if that was the final answer, then Bill Gates continued:

“I don’t like landscaping, so I hire a landscaper.”

I thought to myself, wow, so a multi-billionaire hires a landscaper.   There must be more to life?

And then he nailed it…

This was the part I realized we really need to hear.   Bill Gates said:

”I live life like a university student.  I pick the problems I care about and I work on them.”

He said what’s important is that he has a large network he built up over a lifetime that helps him solve problems.

He said he never gets stuck.

Whenever there is something he needs to know or that he doesn’t understand, Bill Gates find somebody in his network who has the answer or can get the answer.

With that in mind, here is some additional insight into how Bill Gates lives life…

Several years back, I wrote about the best lessons I learned from Bill Gates

My favorite lesson from Bill Gates is actually this one:

Humanities greatest advances are the ones that level the playing field.

Here is how Bill Gates put this lesson in his speech at Harvard:

“Taking a look back, one big reqret is, I left Harvard with no real awareness of the awful inequities in the world.

The appalling disparities of health and wealth and opportunity that condemned millions of people to the lives of despair.

I learned a lot here at Harvard about new ideas and economics, and politics.  I got great exposure to the advances being made in the sciences.

But humanities greatest advances are not in its discoveries, but in how those discoveries are applied to reduce inequity.”

My lessons from Bill Gates went viral at the time.  I remember thinking, wow, Bill Gates really has an impact on people.

One day, I walked into a friend’s office on Microsoft campus and I noticed a poster he had on his wall.

It has a list of powerful lessons, each one was numbered.

As I was reading the lessons, the lessons resonated and I found myself getting inspired on the fly.

I asked my friend, “Where did you get this poster from?”

I also wrote about how to think like Bill Gates:

Bill Gates thinks differently and I wanted to do my best to distill exactly what that is.

I’m a fan of the idea that if you can think differently, you can gain new perspectives and insights, and solve bigger, better, higher-impact problems.

Interestingly, a former speech writer for Bill Gates’ said I really nailed the essence of how Bill Gate’s thinks differently on multiple levels.

One thing that surprised me when I wrote the article, was I consistently got the same feedback from people.

They would tell me that as they read the article, they thought they naturally do what Bill Gate’s does.

But they would say that when they got to the section on “Check Your Thinking Against Bill Gates”, they realized they actually don’t.

I’m really thankful that I put those checks in there, because they help highlight differences in thinking by using the Principle of Contrast.

Sometimes you don’t fully understand something until you know the opposite of it.

The Opportunity Bill Gates Gates Us at Microsoft

On Bill Gate’s last day at Microsoft,  Steve Ballmer put a nice bow on the opportunity that Bill Gates created for us at Microsoft:

““Every one of us has had an opportunity to realize our own potential: we’ve had a chance to contribute to society

… we’ve had a chance to develop and grow as professionals …

we’ve had a chance to prosper personally … we’ve been given an enormous, enormous opportunity

… and Bill gave us that opportunity.”

I think that one line said it best…”an opportunity to realize our own potential.”

If you’re a fan of Maslow’s Hierarchy of Needs, you’ll know that self-actualization is at the top.

Here are a handful of the best Bill Gates quotes to keep you thinking, dreaming, growing your potential, and changing the world:

“Success is a lousy teacher. It seduces smart people into thinking they can’t lose.”

“As we look ahead into the next century, leaders will be those who empower others.”

In the long run, your human capital is your main base of competition.  Your leading indicator of where you’re going to be in 20 years from now is how well you’re doing in your education system.”

“If your culture doesn’t like geeks, you are in real trouble.”

“Everyone needs a coach.  It doesn’t matter whether you’re a basketball player, a tennis player, a gymnast, or a bridge player.”

“I’ve been struck again and again by how important measurement is to improving the human condition.”

“I’m a great believer that any tool that enhances communication has profound effects in terms of how people can learn from each other, and how they can achieve the kind of freedoms they are interested in.”

“We make the future sustainable when we invest in the poor, not when we insist on their suffering.”

“I believe that if you show people the problems and you show them the solutions they will be moved to act.”

“I really had a lot of dreams when I was a kid, and I think a great deal of that grew out of the fact that I had a chance to read a lot.”

You, Too, Can Live Life Like a University Student

My big take away from the session with Bill Gates is that anybody can live life like a university student, to some degree.

Focus on problems that you have a passion for, and build your network throughout life.

Your network, your deep network, is a catalyst and force multiplier for your impact.

They say that in life, it’s what you know and who you know.

If you find yourself getting stuck in too many places, try expanding your network and thinking bigger, bolder, and more ambitious.

Realize your potential by working on the kinds of problems that grow you and your network.

Satya Nadella Quotes on Culture, Innovation, and Leadership
Next Post:Sustainability at Microsoft