Daniel Cook on the 8 Laws of Productivity

Daniel Cook has a great PDF on the 8 Laws of Productivity.  The subtitle is “8 Productivity Experiments You Don’t Need to Repeat.”

It’s the synthesis of Dan’s learnings and research over the years on how to create more productive teams.

He adds that it’s possible for productivity to be negative when workers end up doing more harm than good.

The 8 Laws of Productivity

Here are the 8 Laws of Productivity according to Cook:

Cook tells us that according to Ford, and 12 years of experimentation, 40 hours was the most effective.

Interestingly, an early XP practice was 40 Hour Week, before it became Sustainable Pace.  The main idea is that “productivity does not increase with hours worked.”

A key point here is that “After a certain tipping point, teams tend to be more destructive than productive.” (see InfoQ on Sustainable Pace)

I’ve experience the benefits of a 40 hour work week and wrote about it in 40 Hour Work Week.

An interesting data point is that 6 of the top 10 competitive economies prohibit employees from working over 48 hours/week.  (See MBA on Bring Back the 40 Hour Work Week.)

Law #2 – There is Always a Cost to Crunch

What happens if we work harder in bursts?  Can we take advantage of the burst that comes from working overtime?  What happens if we crunch for a week and then ‘only’ 40 hours for another week?  Are there other patterns of scheduling work that might be more efficient? 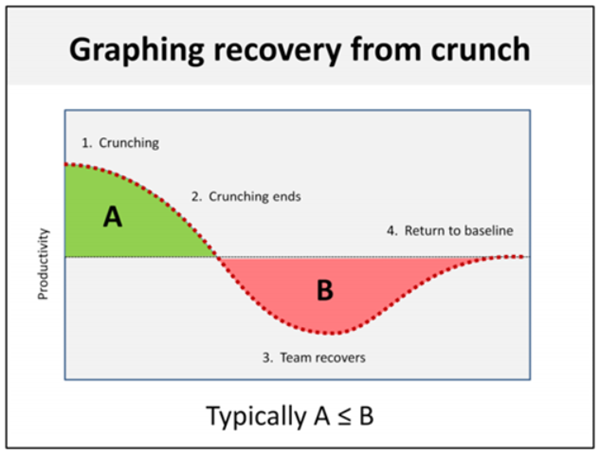 Anything over 40 hours results in a recovery period, no matter how you split it up.
35 to 40 hour weeks can be divided in a variety of ways, such as four 10-hour days on and three days off.
These ‘compressed work weeks’ can reduce absenteeism and, in some cases, increase productivity 10 to 70%

Do the same rules apply to creativity and problem-solving as manual labor?

Cook summarizes the results:
Studies show that creativity and problem solving decreases faster with fatigue than manual labor.
Grinding out problems by working longer on average result in inferior solutions.
Lack of sleep is particularly damaging.

Law #4 — Teams on overtime feel like they are doing more, but actually accomplish less

If many workers self-report that they are the exception to the rule and can work longer with no ill effects, and overtime workers report they are getting more done, is this true?

Cook summarizes the results of measurements where Team A works overtime and Team B does not:
Team A feels like they are doing much more than Team B.
Yet, Team B produces the better product.

Does productivity change for various team sizes and which size team produces the best product?

Cook summarizes the results:
Productivity for small groups is shown to be 30-50% higher than groups over 10
Cost of communication increases dramatically for groups larger than 10
Smaller groups don’t have enough breadth to solve a wide array of problems well

Interestingly, the Navy Seal create super teams with teams of 4.

What is the most productive physical work environment?  Are cubes, individual offices or team rooms most effective?  Every individual has an opinion, but what is best for the team?

Cook summarizes the results:
Studies show 100% increase in productivity
Being nearby means faster communication and problem-solving
Few external interruptions to the team (not the individual) means higher productivity

How should workers of different disciplines be organized?  Should teams be composed of a single discipline? For example, all programmers or all artists?  Or should teams be mixed?

What percentage of team capacity should be officially scheduled?  110% to promote people to ‘stretch’?  100% because that’s what they can do? 80% because slacking is good?

Dan included some of his research sources:

Best Team Size
Is Your Team Too Big? Too Small? What’s the Right Number?
Team Performance and Team Size

MBA on Bring Back the 40 Hour Work Week (Info Graphic)

Strategy Must Be Dynamic
Next Post:10 Big Ideas on Productivity from Getting Results the Agile Way