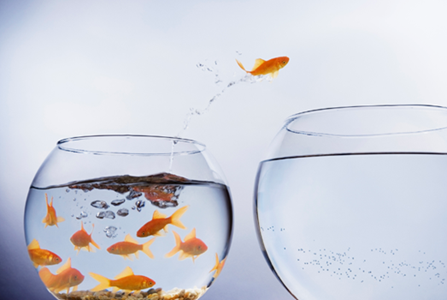 “It’s all about speed of innovation and changing the way you do business.” – John Chambers

Many moons ago, while I was trying to wrap my head around the full scope and impact of Digital Transformation, my manager shared one of the best videos about the Digital Era.

It was a brief video where McKinsey interviewed Cisco’s former CEO, John Chambers, about Digital Transformation and the impact of the Digital Era on the future of business.

How significant is the digital era?   According to Chambers, it’s the biggest technology transition in history.

Or they won’t be around.

If You Don’t Reimagine Yourself, You’re Going to Get Disrupted

The Digital Era is the biggest technology transition we are facing.  If you don’t reimagine you and your company, you will get disrupted by somebody else who does.

The future belongs to those who adapt and embrace the transition and all that Digital Transformation has to offer.

“If you’re a leader in today’s world, whether you’re a government leader or a business leader, you have to focus on the fact that this is the biggest technology transition ever.

This digital era will dwarf what’s occurred in the information era and the value of the Internet today.

As leaders, if you don’t transform and use this technology differently—if you don’t reinvent yourself, change your organization structure; if you don’t talk about speed of innovation—you’re going to get disrupted.

And it’ll be a brutal disruption, where the majority of companies will not exist in a meaningful way 10 to 15 years from now.”

Business Models Will Rise and Fall at a Tremendous Speed

The information age had fundamentally transformed almost every aspect of society, but it’s not over yet.

The Digital Age will transform business and our lives.

“This digital age is the connectivity of going from a thousand devices connected to the Internet to 500 billion.

Business models will rise and fall at a tremendous speed. It will create huge opportunities—probably $19 trillion in economic value over the next decade, incremental above what we’re seeing today.

That’s the size of the US economy, plus some.”

Technology and Intelligent Architectures are the Easy Part

The surprise is that the easy part of the transition to the Digital Era is the technology itself.

“When many people think about this, you want to think about the intelligence of an architecture, where you can get access to any data, any point and time you want.

It’s simple to describe, but it really means you’re dealing with intelligent networks—a next generation of the Internet, if you will.

But connecting 500 billion devices doesn’t get the job done.

It’s the process change behind it.

So you’ve got technologies like cloud or mobility and cybersecurity and the Internet of Things that are very important.

The Hard Part is Structuring Your Organization for Speed of Innovation

The hard part of the transition to the Digital Era is figuring out how to change your organization to focus on customer outcomes and embrace speed of innovation.

“The hard part is how do you change your organization structure?

How do you change your culture to be able to think in terms of outcomes for your customers?

It’s all about speed of innovation and changing the way you do business.

The majority of companies will be digital within five years, yet the majority of their digital efforts will fail, which speaks to what a CEO has to do differently.”

You Have to Reinvent Yourself and Your Company

Companies have always run into trouble when they take too long to change and respond to the market.

But what’s different in the Digital Era is the radical speed of change I the market.

Now if you don’t respond fast enough, the market can leave you behind much faster.

Remember the Sears catalog, where you could buy just about anything, including a house?

Well, Amazon disrupted Sears and it didn’t take long for Amazon to dominate.

“She or he has to think much more outside the box.

They have to reinvent themselves.

They have to reinvent their company.

Not stay doing the right thing too long, if you will.

That’s what got companies in trouble in the past. But the rate of change then was much slower.”

Technology Will Become the Company

Technology is more than an enable, it will become the company.

“Today, you’re talking about digitization being an integral part of the fabric of a company’s business strategy or the way it interfaces its supply chain with its customers.

Not enabled by technology—technology will become the company.”

Focus on the Horizontal Integration of Your Company

Silos will be the downfall of your company.

They will get disrupted by smaller, better businesses that are customer-obsessed and fast in the market.

“Focus more horizontally on how things work together as opposed to silos.

If all you do is have a bunch of silos in your company that don’t really talk to each other, you’re going to get displaced by, perhaps, a small company that has just a CEO and a CIO and has $1 billion in sales.”

Cisco Changed Its Organization to Focus on Business Outcomes, Architectures, and Speed-to-Market

Cisco changed their engineering organization of 5,000+ to be more horizontal, and their sales force to focus on business outcomes, architectures, and speed-to-market delivery.

“We transformed our engineering organization from being in silos to being horizontal, taking out about 5,000 people.

We worked across the groups, refocused on leaders who could work horizontally together as opposed to in silos, the majority on their own profit and loss.

Yet we changed 41 percent of the client interface and execs because they were selling routers and switching technology, not business outcomes, architectures, and speed-to-market delivery.”

It wasn’t a proud moment, but Chambers said it was necessary to change leadership so Cisco could disrupt vs. be disrupted.

“And it caused us to change our top leadership.

We changed probably 40 percent of our top leadership over the last two years.

That’s not something I’m terribly proud of, but it’s something that we had to do so that we disrupt as opposed to be disrupted.

So, when I talk about, in theory, what CEOs need to do, this is what we did ourselves.”

You Have to Create an Internal Environment of Really Rapid Innovation

The key to success in the Digital Era is to create an environment of continuous, rapid innovation.

We’ve been in this transition for almost 20 years at Cisco.

We use M&A as a way to enter new markets, and we’re number one or number two in 16 major product families.

Our targeted minimum market share is 40 percent, which we hit most all the time.

But it’s about to change again. We have to do this faster.

We have to create an environment of really rapid innovation internally.”

Make Innovation Independent or Your Culture Will Kill It

Some innovative leaders describe this situation as “the antibodies in the system coming out”.

“The first step is merely making it an independent group, because if you do it inside your organization, your existing culture will kill it.

So why do these transitions fail or succeed?

Companies fail to understand the implications of how quickly this technology will transform their business.

And they underestimate what it really means to their economic growth or that of their competitors.”

A tradition business unit will focus on incremental increases in productivity, but that’s not what the Digital Era is about.

The Digital Era is about radical transformation and exponential change.

“Secondly, they stay doing the right thing too long.

And that’s what gets so many of us trouble, because we’re trained to get a 3 to 5 percent increase in productivity.

To just crank it: do a little bit better each year; cut expenses a little bit; grow the top line.

This is about exponential change.”

How Satya Nadella Helped Microsoft Rediscover Its Soul
Next Post:What is Digital Transformation?